The RAPIDS team is in the process of migrating from Jenkins to GitHub Actions for CI/CD. The page below outlines some helpful information pertaining to the implementation of GitHub Actions provided by the RAPIDS Ops team. The official GitHub documentation for GitHub Actions is also useful and can be viewed here.

The RAPIDS Ops team provides GPU enabled self-hosted runners for use with GitHub Actions to the RAPIDS and other select GitHub organizations.

To ensure proper usage of these GPU enabled CI machines, the RAPIDS Ops team has adopted a strategy known as Marking code as trusted by pushing upstream which is described in this CircleCI blog post.

Pull requests authored by members of the given GitHub organization are considered trusted and therefore are copied to a pull-request/* branch for testing automatically.

Pull requests from authors outside of the GitHub organization must first be reviewed by a repository member with write permissions (or greater) to ensure that the code changes are legitimate and benign. That reviewer must leave an /ok to test (or /okay to test) comment on the pull request before its code is copied to a pull-request/* branch for testing.

One consequence of the strategy described above is that a lot of pull-request/* branches will be created and deleted in GitHub as pull requests are opened and closed. To avoid having these branches fetched locally, you can run the following git config command, where upstream in remote.upstream.fetch is the git remote name corresponding to the source repository:

For NVIDIA employees with VPN access, artifacts from both pull-requests and branch builds can be accessed on https://downloads.rapids.ai/.

There is a link provided at the end of every C++ and Python build job where the build artifacts for that particular workflow run can be accessed. 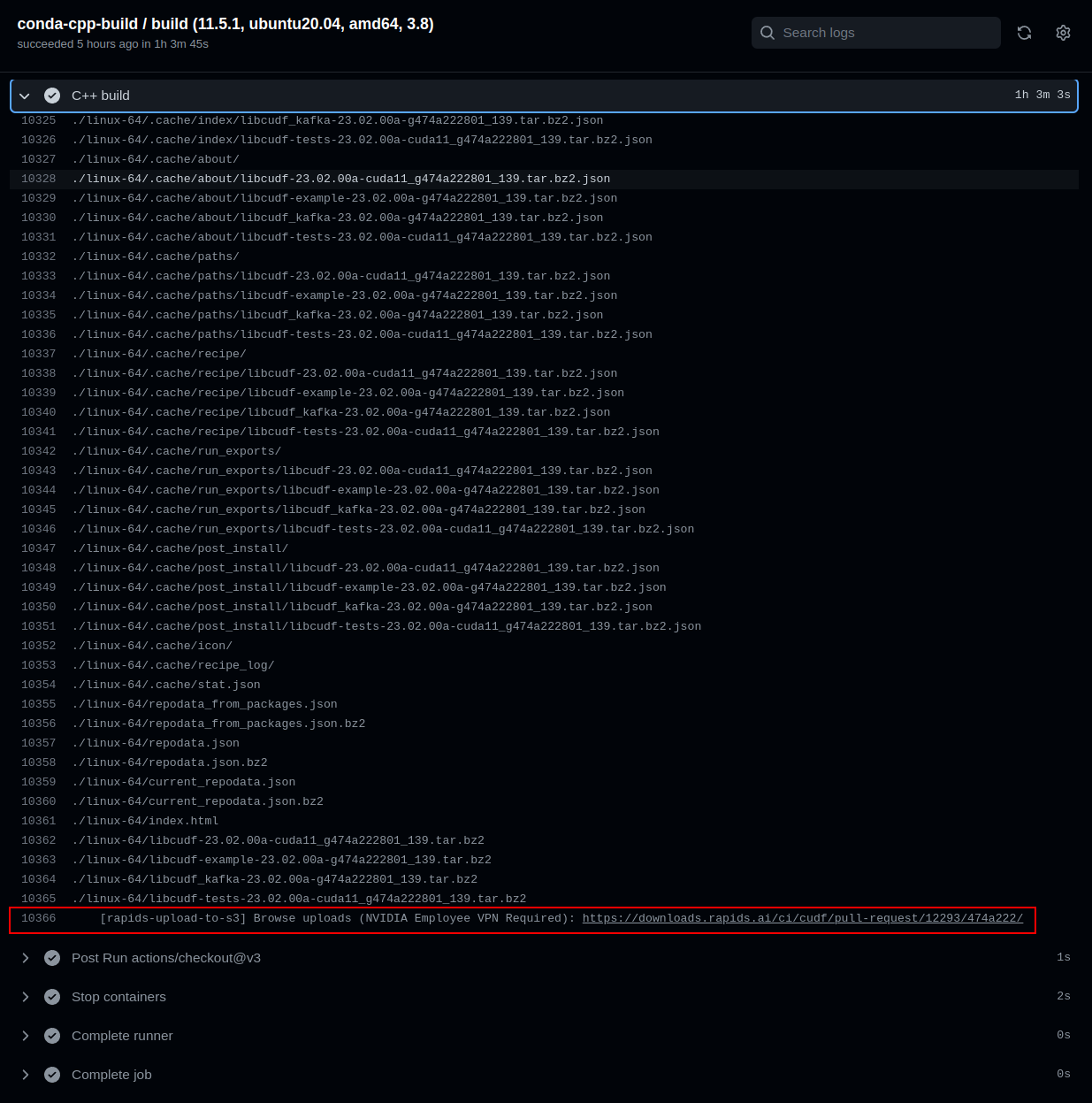 With GitHub Actions, it is not possible to configure all commits for a pull request to be skipped. It must be specified at the commit level.

See the GitHub Actions documentation page below on how to rerun failed workflows. In addition to rerunning an entire workflow, GitHub Actions also provides the ability to rerun only the failed jobs in a workflow.

The RAPIDS Ops team provides a set of self-hosted runners that can be used in GitHub Action workflows throughout supported organizations. The tables below outline the labels that can be utilized and their related specifications.

The CPU labeled runners are backed by various EC2 instances and do not have any GPUs installed.

The GPU labeled runners are backed by lab machines and have the GPUs specified in the table below installed.

The code snippet below shows how the labels above may be utilized in a GitHub Action workflow.

Note: It is important to add the self-hosted label in addition to the labels described in the tables above.